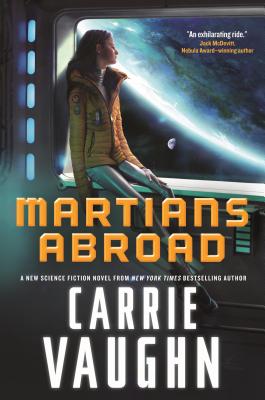 Well-known for her bestselling series Kitty Norville, Carrie Vaughn moves to science fiction with Martians Abroad, a novel with great crossover appeal. Polly Newton has one single-minded dream, to be a starship pilot and travel the galaxy. Her mother, the Director of the Mars Colony, derails Polly's plans when she sends Polly and her genius twin brother, Charles, to Galileo Academy on Earth.

Homesick and cut off from her plans for her future, Polly cannot seem to fit into life on Earth. Strange, unexplained, dangerous coincidences centered on their high-profile classmates begin piling up. Charles may be right—there's more going on than would appear, and the stakes are high. With the help of Charles, Polly is determined to find the truth, no matter the cost.


Praise For Martians Abroad: A Novel…

“A tribute to the power of science fiction, evoking a giddy sense of wonder and adventure about space exploration, technology, and human ingenuity.” —NPR

"This is a classic...adventurous...with retro SF twists that nod to Heinlein’s oeuvre." —Booklist

“This easygoing adventure has an affable appeal.”—Kirkus

"The whole story is great fun. Your Heinlein itch will be scratched in a 21st-century way" —RT Book Reviews

“A refreshing mix of teen drama and science.”—Elitist Book Reviews

“Evokes the same wide-eyed enthusiasm and sense of limitless possibilities contained in many Golden Age stories and novels, but with a modern eye toward inclusivity and a realistic vision of future technologie.”—Fantasy Literature (4-1/2 out of 5 stars)

Carrie Vaughn is best known for her New York Times bestselling series of novels about a werewolf named Kitty who hosts a talk radio show for the supernaturally disadvantaged. Her novels include a near-Earth space opera, Martians Abroad, from Tor Books, and the post-apocalyptic murder mysteries Bannerless and The Wild Dead. She's written several other contemporary fantasy and young adult novels, as well as upwards of 80 short stories, two of which have been finalists for the Hugo Award. She's a contributor to the Wild Cards series of shared world superhero books edited by George R. R. Martin and a graduate of the Odyssey Fantasy Writing Workshop. An Air Force brat, she survived her nomadic childhood and managed to put down roots in Boulder, Colorado.
Loading...
or
Not Currently Available for Direct Purchase