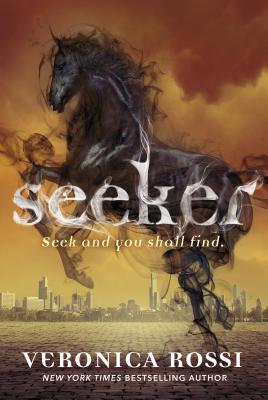 When Daryn claimed she was seeing “visions” during her sophomore year of high school, no one believed the truth. She wasn’t losing her mind, she was gaining the Sight—the ability to see the future. If she just paid attention to the visions, they’d provide her with clues and show her how she could help people. Really help them. Daryn embraced her role as a Seeker. The work she did was important. She saved lives.

Sebastian was her first—and worst—mistake.

Since the moment she inadvertently sealed him in a dark dimension with Samrael—the last surviving demon in the Kindred—guilt has plagued her. Daryn knows Sebastian is alive and waiting for help. It’s up to her to rescue him. But now that she needs the Sight more than ever to guide her, the visions have stopped.

Daryn must rely on her instincts, her intelligence, and on blind faith to lead the riders who are counting on her in search of Sebastian. As they delve into a shadowy realm where nothing is as it seems and where Samrael is steadily amassing power, Daryn faces the ultimate test. Will she have to become evil to destroy evil? The very fate of humankind rests in the answer.

"The feeling of imminent danger and the constant battles with terrifying creatures help bring this vivid story to life. However, the depth of characterization is what will make readers connect to this small group of teens on a mission to save humanity. Gideon and Daryn display a powerful chemistry from their very first meeting, while the personality conflicts between Gideon and his fellow horsemen keep this adventure both intense and humorous."--RT Book Reviews, Top Pick!

Veronica Rossi is a New York Times bestselling author of Under the Never Sky Trilogy, Riders, and other fiction for young adults. She completed undergraduate studies at UCLA and then went on to study fine art at the California College of the Arts in San Francisco. She lives in Northern California with her husband and two sons. When not writing, she enjoys reading, painting, and counting down the minutes until she can get back to making up stories about imaginary people.
Loading...
or
Not Currently Available for Direct Purchase