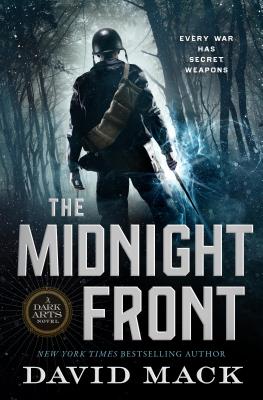 On the eve of World War Two, Nazi sorcerers come gunning for Cade but kill his family instead. His one path of vengeance is to become an apprentice of The Midnight Front—the Allies’ top-secret magickal warfare program—and become a sorcerer himself.

Unsure who will kill him first—his allies, his enemies, or the demons he has to use to wield magick—Cade fights his way through occupied Europe and enemy lines. But he learns too late the true price of revenge will be more terrible than just the loss of his soul—and there’s no task harder than doing good with a power born of ultimate evil.


Praise For The Midnight Front: A Dark Arts Novel…

“If you grew up reading and rereading the Harry Potter books, The Midnight Front is right up your alley.”—The Nameless Zine

“A rollicking, high-stakes adventure with action tailor-made for the movies.” —Brian Staveley, author of The Emperor’s Blades

“Propulsive, with well-crafted characters and cinematic set pieces culled from the war's most momentous crossroads. Equal parts brimstone and gunpowder, the book deftly mixes the tropes of high fantasy into a semirealistic portrayal of WWII, resulting in an entertaining scenario that wouldn't be out of place in a video game or a spirited match of Dungeons & Dragons. A complex, entertaining fantasy that sets loose a 'chosen one' hero arc among the dogs of war.” —Kirkus Reviews

David Mack is the creator, author, and artist of the critically acclaimed Kabuki graphic novels, which Spin magazine describes as “dazzling.” Called “One of the geniuses of the medium,” by Entertainment Weekly, his innovative work in comics has garnered nominations for six Eisner Awards (America’s most prestigious comics award), four International Eagle Awards, and both the Harvey Award and the Kirby Award for Best New Talent.  The Shy Creatures marks David Mack’s picture book debut.