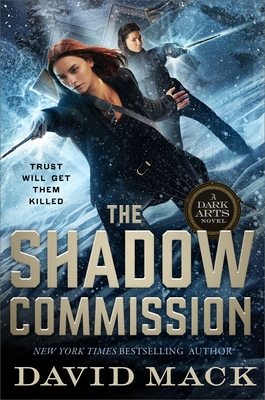 The wizards of the Cold War must uncover a secret cabal responsible for the Kennedy assassination in The Shadow Commission, New York Times bestselling author David Mack's globe-spanning historical fantasy sequel to The Iron Codex.

November 1963. Cade and Anja have lived in hiding for a decade, training new mages. Then the assassination of President Kennedy trigger a series of murders whose victims are all magicians—with Cade, Anja, and their allies as its prime targets. Their only hope of survival: learning how to fight back against the sinister cabal known as the Shadow Commission.

For The Shadow Commission

“The Dark Arts series is a thoroughly entertaining saga.”—SFF World

A rollicking, high-stakes adventure with action tailor-made for the movies.” —Brian Staveley, author of The Emperor’s Blades

David Mack is the creator, author, and artist of the critically acclaimed Kabuki graphic novels, which Spin magazine describes as “dazzling.” Called “One of the geniuses of the medium,” by Entertainment Weekly, his innovative work in comics has garnered nominations for six Eisner Awards (America’s most prestigious comics award), four International Eagle Awards, and both the Harvey Award and the Kirby Award for Best New Talent.  The Shy Creatures marks David Mack’s picture book debut.