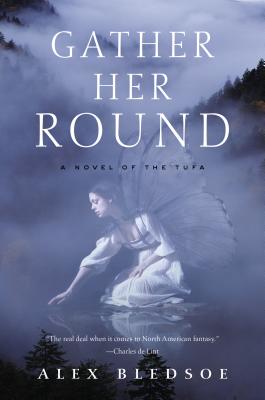 In Cloud County, where music and Tufa, the otherworldly fae community, intermix, a monster roams the forest, while another kind of evil lurks in the hearts of men.

Young Tufa woman Kera Rogers disappears while hiking in the woods by Needsville. Soon, her half-eaten remains are found, and hunters discover the culprits: a horde of wild hogs led by a massive boar with seemingly supernatural strength.

Kera’s boyfriend Duncan Gowen mourns her death, until he finds evidence she cheated on him with his best friend Adam Procure. When Adam’s body is the next one found, who is to blame: Duncan or the monstrous swine?

As winter descends and determined hunters pursue beasts across the Appalachians, other Tufa seek the truth behind Adam and Kera’s deaths. What answers will unfold come spring?


Praise For Gather Her Round: A Novel of the Tufa (Tufa Novels #5)…

“Beautiful prose, hillbilly faerie in the Appalachian Mountains, music that’s integral to the story, and a sense of wonder that never quits, whispering merrily along — evenin the mundane scenes — like an underground river.
[T]his is my favorite of the Tufa novels — or at least it will until the next one comes out. Recommended.” —Charles de Lint for Fantasy & Science Fiction

“Gripping. Bledsoe adeptly blends fairy tales and folklore as he expands the concept of exiled fairies, much diminished, dwelling in the mountains and hollows of America....Bledsoe comfortably inhabits the space where rural fantasy and magic realism overlap and makes it his own.” — Publishers Weekly

“A lush, descriptive and darkly creative blend of real-world mystery, deeply insightful character study, and a rich exploration of folklore that combine to make for a thoroughly immersive reading experience that succeeds on every level. With a twisting plot full of beautifully flawed, fully realized characters, this book unfolds with the unhurried pace and addictive power of a campfire legend.” —RT Book Reviews (Top Pick! 4 1/2 stars)

“Readers need not have read the previous Tufa books; this title works well as a stand-alone and as a spectacular addition to the series. A must-read for fantasy or literary fiction fans and also a perfect fit for a mystery lover seeking something a little different.”—Booklist

“[This] marvelous series combines human drama with just a touch of otherworldly magic. The split nature of the Tufa community is further explored, but Bledsoe never reduces the two sides to basic good vs. evil, as he allows his characters to make their own choices.”—Library Journal

For the Tufa novels

“Reading Long Black Curl makes me so happy that there are authors writing real North American-based mythic fiction: stories that incorporate the Americas where many of us live, infusing them with their own folklore and mythology—one that sits so well it feels like it's always been a part of us.” —Charles de Lint

“Beautifully written, surprisingly moving, and unexpected in the best of ways.” —Seanan McGuire, New York Times bestselling author, on The Hum and the Shiver

“Captures the allure and the sometimes sinister beauty of the Appalachian backwoods."—Library Journal, starred review, on Wisp of a Thing

“It's no secret that music stirs the soul, and combining that with a folk-tale setting makes a deeply heart-rending novel.” —RT Book Reviews (four stars) on Long Black Curl

“Haunting. . . . It's a mixture: folk tales and folk songs, updated with a dose of Sex and the City. Or, you might say, a rustic version of 'urban fantasy,' with its suggestion that there's mystery just around the corner, hidden behind even the dullest small-town façade.” —The Wall Street Journal on The Hum and the Shiver

“With his subtle, character-driven approach, Bledsoe skillfully fuses music, legend, and regional atmosphere to create something that feels like an unexplored corner of American mythology.” — Publishers Weekly on Chapel of Ease

“A fun, fascinating read that revels in elements of folklore, magic realism, and just good old fashioned suspense and interpersonal drama. And it is always refreshing to have a queer character centered, especially when they’re fully realized, allowed to be sexual, and perfectly capable of kicking ass when need be.” — Our Lives Magazine (Madison) on Chapel of Ease

ALEX BLEDSOE is the author of the Eddie LaCrosse novels (The Sword-Edged Blonde, Burn Me Deadly, Dark Jenny, and Wake of the Bloody Angel), the novels of the Tufa (The Hum and Shiver, Wisp of a Thing, Long Black Curl, and Chapel of Ease), and the Memphis Vampires (Blood Groove and Girls with Games of Blood). Bledsoe grew up in Memphis, Tennessee. He now lives in Madison, Wisconsin.
Loading...
or support indie stores by buying on
(This book is on backorder)