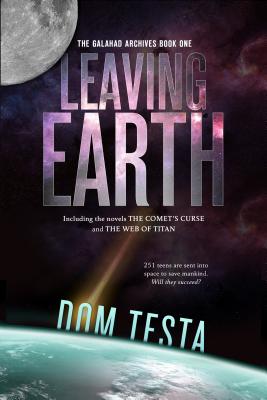 The Galahad Archives Book One

Leaving Earth (The Comet's Curse; The Web of Titan)

In The Comet's Curse the Galahad's fledgling crew discovers they didn't set out from Earth alone. Someone has stowed away on the ship and means to sabotage their mission. In The Web of Titan the crew discovers a mysterious metal pod in space. As they prepare to bring it on board they're hit by an unknown disease that is beyond their medical experience and spreading fast. Sixteen-year-old commander Triana Martell and her council must find a way to overcome all obstacles. For if their mission fails, it will mean the end of the human race.

The Comet's Curse, the first book included in the omnibus, is an American Library Association Popular Paperback for Young Adults

DOM TESTA, of Denver, Colorado, has been a radio show host since 1977, and currently is a co-host of the popular "Dom and Jane Show" on Mix 100 in Denver. A strong advocate of literacy programs for children, he regularly visits Colorado schools. Dom began the Big Brain Club to encourage students to overcome the peer pressure that often prevents them from achieving their true potential. He is the author of the Galahad series of young adult novels, beginning with The Comet's Curse.
Loading...
or support indie stores by buying on