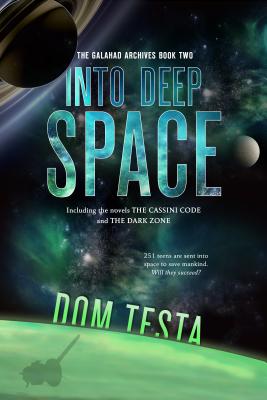 Into Deep Space (The Cassini Code; The Dark Zone)

The Galahad Archives Book Two: Into Deep Space is the second of three thrilling two-book omnibus editions in the Galahad Archives series for young adults by Dom Testa. The edition includes the novels The Cassini Code and The Dark Zone.

In The Cassini Code, Galahad is preparing to enter a deadly minefield of asteroids when several crew members rise up against sixteen-year-old commander Triana Martell. Led by the charismatic Merit Simms, the mutinous faction lobbies to abandon the mission and return to Earth. In The Dark Zone, a swarm of unknown organisms affix themselves to the hull of Galahad. Now it’s up to Triana and her Council to uncover the intentions of their unexpected passengers. Can Triana and the crew of Galahad overcome these new obstacles and stay on course for the salvation of the human race?

The Comet’s Curse, now collected in The Galahad Archives Book One: Leaving Earth, is on the American Library Association’s Popular Paperback for Young Adults list.

DOM TESTA, of Denver, Colorado, has been a radio show host since 1977, and currently is a co-host of the popular "Dom and Jane Show" on Mix 100 in Denver. A strong advocate of literacy programs for children, he regularly visits Colorado schools. Dom began the Big Brain Club to encourage students to overcome the peer pressure that often prevents them from achieving their true potential. He is the author of the Galahad series of young adult novels, beginning with The Comet's Curse.
Loading...
or support indie stores by buying on