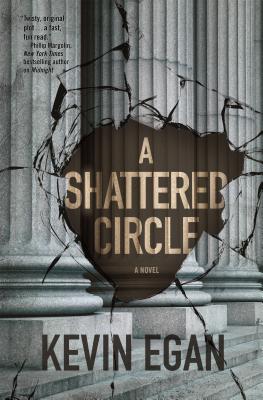 After an accident leaves New York City judge William Lonergan mentally impaired, his wife, Barbara, who doubles as the judge’s confidential secretary, is determined to protect his health, his career, and his reputation. Barbara and Larry Seagle, the judge’s law clerk, support Judge Lonergan enough for him to fulfill his judicial duties, keeping his true condition secret. Months pass under this exhausting routine, until suddenly Barbara finds her new way of life under siege.

A private investigator needs Judge Lonergan's help in investigating the murder of a well-known lawyer in upstate New York. A bitter litigant files a grievance against the judge with the Judicial Conduct Commission. Driven by loyalty and guilt, court officer Foxx is looking into a decades-old courthouse murder to exonerate a childhood friend who is dying in prison. He hits many dead ends, until he learns that Barbara Lonergan, who worked as a stenographer long before she married the judge, likely has information about the murder victim.

After the judge is attacked, Barbara decides they should leave New York City. Arriving at their summer house, Barbara believes that she and the judge are safe. She could not be more wrong.


Praise For A Shattered Circle: A Novel…

"Egan populates this standalone, his best to date, with characters readers will empathize with and cleverly resolves each of the multiple story lines."--Publishers Weekly, starred review

Kevin Egan graduated with a B.A. in English from Cornell University. He is the author of more than five novels, including Midnight and Local Knowledge, and numerous short stories. A self-described non-practicing attorney, he has spent his entire legal career working in the New York state court system, including lengthy stints as law clerk to two State Supreme Court Justices. His short fiction has appeared in Alfred Hitchcock Mystery Magazine, Rosebud, and The Westchester Review. He occasionally teaches fiction writing as an adjunct instructor at Westchester Community College and regularly teaches legal writing at Berkeley College in Manhattan.
Loading...
or
Not Currently Available for Direct Purchase