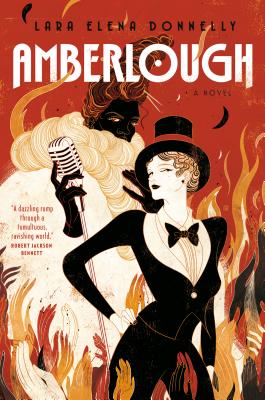 Book 1 in the Amberlough Dossier

A double-agent sacrifices all his ideals in order to save his smuggler lover before a government coup takes over their decadent city in Lara Elena Donnelly’s glam spy thriller debut, now a Nebula finalist for Best Novel!


“Exploring the roots of hatred, nationalism, and fascism, while at the same time celebrating the diversity, love, romance, fashion, and joy the world is capable of producing.” —Bookriot

In Amberlough, amidst rising political tensions, three lives become intertwined with the fate of the city itself.

The Smuggler: By day, Aristide Makricosta is the emcee for Amberlough City’s top nightclub. By night, he moves drugs and refugees under the noses of crooked cops.

The Spy: Covert agent Cyril DePaul thinks he’s good at keeping secrets, but after a disastrous mission abroad, he makes a dangerous choice to protect himself…and hopefully Aristide too.

The Dancer: Streetwise Cordelia Lehane, burlesque performer at the Bumble Bee Cabaret and Aristide’s runner, could be the key to Cyril’s plans—if she can be trusted.

As the twinkling marquees lights yield to the rising flames of a fascist revolution, these three will struggle to survive using whatever means — and people — necessary. Including each other.

“Sparkling with slang, full of riotous characters, and dripping with intrigue, Amberlough is a dazzling romp through a tumultuous, ravishing world.” —Robert Jackson Bennett, winner of the Shirley Jackson Award and the Edgar Award

LARA ELENA DONNELLY is a graduate of the Alpha and Clarion writing workshops. Her fiction won the Dell Magazine Award for Undergraduate Excellence in Science Fiction and Fantasy and she has been published in Icarus, Strange Horizons, Grim Corps, and Mythic Delirium. Donnelly has worked as professional fire performer, belly dancer, and is knowledgeable in aerial acrobatics and burlesque. Amberlough is her debut novel.
Loading...
or
Not Currently Available for Direct Purchase