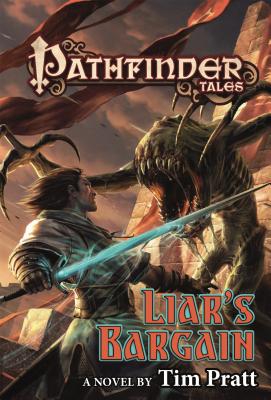 Paizo Publishing is the award-winning publisher of fantasy roleplaying games, accessories, and board games. Pathfinder Tales: Liar's Bargain is the latest in their popular novel series.

The sequel to Hugo Award Winner Tim Pratt’s Liar’s Island! For charming con man Rodrick and his talking sword Hrym, life is all about taking what you can and getting away clean. But when the pair are arrested in the crusader nation of Lastwall, Rodrick faces immediate execution, with Hrym spending the rest of eternity trapped in an enchanted scabbard. Their only hope lies in a secret government program in which captured career criminals are teamed up and sent on suicide missions too sensitive for ordinary soldiers. Trapped between almost certain death and actual certain death, the two join forces with a team of rogues and scoundrels, ready to serve their year-long tenure as best they can. Yet not everyone in their party is what they seem, and a death sentence may only be the start of the friends’ problems.

TIM PRATT is an American science fiction and fantasy writer, born December 12, 1976. His short fiction has been nominated for the Nebula Award and the World Fantasy Award, and his story "Impossible Dreams" won the Hugo Award in 2007. His story "Hart & Boot" was selected by Michael Chabon for Best American Short Stories 2005 (Houghton Mifflin, 2006). Some of Pratt's short fiction is collected in Little Gods (Prime Books, 2003) and Hart & Boot & Other Stories (Night Shade Books, 2007). As "T. A. Pratt," he has published four urban fantasy novels about sorceress Marla Mason: Blood Engines, 2007; Poison Sleep, 2008; Dead Reign, 2008; and Spell Games, 2009, all from Bantam Spectra. As Tim Pratt, he is the author of the idiosyncratic fantasy novel The Strange Adventures of Rangergirl (Bantam Spectra, 2005). Tim Pratt lives in Oakland, California, where he works as a senior editor of Locus, the trade magazine of the science fiction field.
Loading...
or support indie stores by buying on