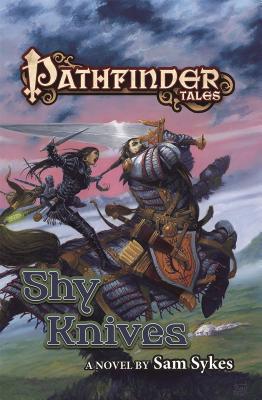 Pathfinder Tales: Shy Knives is based on the award-winning world of the Pathfinder Roleplaying Game. With more than a million players worldwide, Pathfidner is the world's most popular tabletop RPG.

Shaia “Shy” Ratani is a clever rogue who makes her living outside of strictly legal methods. While hiding out in the frontier city of Yanmass, she accepts a job solving a nobleman’s murder, only to find herself sucked into a plot involving an invading centaur army that could see the whole city burned to the ground. Shy could stop that from happening, but doing so would involve revealing herself to the former friends who now want her dead. Add in an aristocratic partner with the literal blood of angels in her veins, and Shy quickly remembers why she swore off doing good deeds in the first place.

SAM SYKES is the author of the Aeons’ Gate trilogy for Pyr, and The City Stained Red for Orbit. He’s a popular humorous online personality with a dedicated fanbase and over 10,000 Twitter followers.
Loading...
or support indie stores by buying on