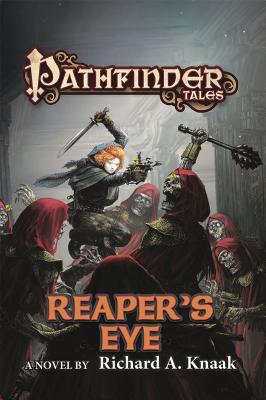 With more than a million players worldwide, Pathfidner is the world's most popular tabletop RPG. Pathfinder Tales: Reaper's Eye is based on the award-winning world of the Pathfinder Roleplaying Game.

Daryus Gaunt used to be a crusader, before a questionable battlefield decision forced him to desert his unit. Pathfinder Shiera Tristane is an adventuring scholar obsessed with gaining the recognition she feels was stolen from her. When both are contacted by a sinister talking weasel and warned of a witch about to release a magical threat long trapped beneath an ancient temple, the two have no choice but to venture into the demon-haunted Worldwound in order to stop the disaster. Yet there’s more to the situation than either realizes, and neither fame nor redemption will matter unless they can first survive.

Richard A. Knaak is the New York Times bestselling author of more than 40 novels, including tie-in work for World of Warcraft, Diablo, Dragonlance, and Age of Conan, as well as his creator-owned Dragonrealms series.
Loading...
or
Not Currently Available for Direct Purchase