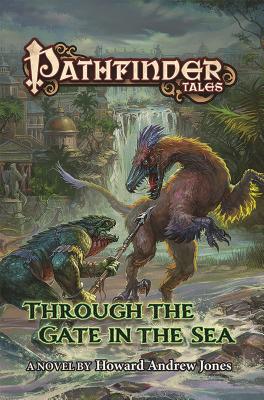 Through The Gate in the Sea

Deepwater salvager Mirian Raas and her bold crew may have bought their nation’s freedom with a hoard of lost lizardfolk treasure, but their troubles are only just beginning in this sequel to Beyond the Pool of Stars.

When Mirian’s new lizardfolk companions, long believed to be the last of their tribe, discover hints that their people may yet survive on a magical island, the crew of the Daughter of the Mist is only too happy to help them venture into uncharted waters. Yet the perilous sea isn’t the only danger, as the devil-worshiping empire of Cheliax hasn’t forgotten its defeat at Mirian’s hands, and far in the east, an ancient, undead child-king has set his sights on the magical artifact that’s kept the lost lizardfolk city safe all these centuries.

Pathfinder is the world's bestselling tabletop role-playing game—now adapted as a series of novels.

Paizo Inc. is a leading publisher of fantasy roleplaying games, accessories, board games, and novels. Paizo Publishing has received more than 50 major awards and has grown to become one of the most influential companies in the hobby games industry.
Loading...
or
Not Currently Available for Direct Purchase