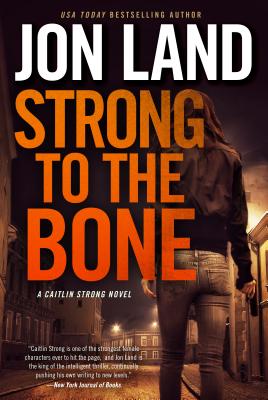 Strong to the Bone

The Present: His daughter, fifth generation Texas Ranger Caitlin Strong, finds herself pursuing the killer her father never caught in the most personal case of her career—a conspiracy stretching from that Nazi POW camp to a modern-day neo-Nazi gang.

A sinister movement has emerged from the shadows of history, determined to undermine the American way of life. Its leader, Armand Fisker, has an army at his disposal, a deadly bio-weapon, and a reputation for being unbeatable. But he’s never taken on the likes of Caitlin Strong and her outlaw lover, Cort Wesley Masters.

To prevent an unspeakable cataclysm, Caitlin and Cort Wesley must win a war the world thought was over.

“Blasts right out of the chute . . . the twists and action don’t stop until the final page.” —CJ Box, #1 New York Times bestselling author

“Every installment in this remarkable series is stunning, and the latest is no different, his most intricate and best by far. . . . Jon Land is the only author I have ever read who continually ups his game and never disappoints!” —Suspense Magazine

“A high-octane tale that blasts out of the gate and never lets up.” —HuffPost

“Fantastically written with larger-than-life characters and explosive action . . . Fans of the Jack Reacher series should definitely jump in on this one, too.” —San Francisco Book Review

“Fast-moving and riveting from beginning to end. . . . An exhilarating ride.” —Fresh Fiction

“An outstanding work of fiction that should rank among the very best of Jon Land’s impressive oeuvre. In Caitlin Strong, he has crafted one of the most dynamic, compelling (and aptly-named) series protagonists of our age.” —Criminal Element