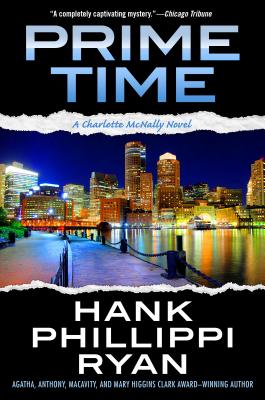 Seasoned investigative reporter Charlotte McNally knows that in the cutthroat world of television journalism, every story could be your last. There’s always someone younger and prettier to take your place, always a story more sensational to drive ratings through the roof.

When Brad Foreman’s widow demands to know why Charlie never answered his email, Charlie is confused. She never received his message. What did Brad, an accountant at a pharmaceutical company, want to tell her? As she searches through her computer, she finds an innocent-looking email in her junk mail folder that may turn out to be the biggest story of her career.

Is the encoded email--and the ones that follow--linked to Brad’s “accidental” death? Charlie’s investigation leads her to Brad’s friend, professor Josh Gelston, who is charming and exceedingly helpful--perhaps suspiciously so.

Charlie must decide if she can trust Josh…before a multimillion-dollar fraud ring with murder in its arsenal makes her the next lead story.

“A wonderful mystery... The author juggles plot and character very deftly with Charlie emerging as one of the wittiest and brightest protagonists in current crime fiction." - Connecticut News

USA Today bestselling author HANK PHILLIPPI RYAN has won five Agatha Awards in addition to Anthony, Macavity, Daphne du Maurier, and Mary Higgins Clark Awards. As on-air investigative reporter for Boston's WHDH-TV, she's won 36 Emmys and many more journalism honors, and her work has resulted in new laws, criminals sent to prison, homes saved from foreclosure, and millions of dollars in restitution for victims and consumers. A past president of National Sisters in Crime and founder of MWA University, her novels include Trust Me, The Murder List, the Charlotte McNally series (starting with Prime Time), and the Jane Ryland series (which begins with The Other Woman). Ryan lives in Boston with her husband, a nationally renowned civil rights and criminal defense attorney.
Loading...
or
Not Currently Available for Direct Purchase