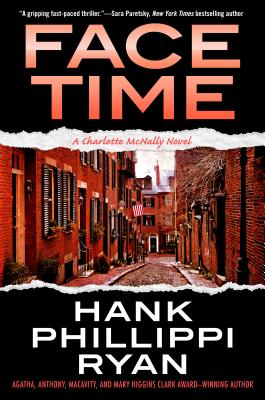 Veteran TV reporter Charlotte McNally fights for justice, journalism -- and the battle against on-air aging. She knows that despite years of experience, she's only as good as her most recent blockbuster story. The good news: she's got explosive evidence that could free an innocent woman from prison. Dorinda Keller confessed to killing her husband, but the evidence doesn't add up. Why would an innocent person confess to cold-blooded murder?

The bad news: her investigation makes Charlotte -- and someone she loves -- the real killer's next target. Charlotte knows she has what it takes to get the story. Unfortunately, the more Charlotte snoops around, the more people turn up dead.

Face Time by Boston Globe bestseller and Emmy-winning reporter Hank Phillippi Ryan is the second book in the award-winning, out-of-print Charlotte McNally series, now repackaged for her many new fans!

"A gripping fast-paced thriller with an important story line and an engaging and unusual heroine...a vivid behind-the-scenes look at television news...[and] a cast of characters whom we hope to see again." - Sara Paretsky, author of the V.I. Warshawski series

"An exciting voice for smart women who are tired of silly chick lit and ready for some real, kick-ass romance and intelligent plot. I loved it!" - Sarah Strohmeyer, author of the Bubbles Yablonsky series

USA Today bestselling author HANK PHILLIPPI RYAN has won five Agatha Awards in addition to Anthony, Macavity, Daphne du Maurier, and Mary Higgins Clark Awards. As on-air investigative reporter for Boston's WHDH-TV, she's won 37 Emmys and many more journalism honors, and her work has resulted in new laws, criminals sent to prison, homes saved from foreclosure, and millions of dollars in restitution for victims and consumers. A past president of National Sisters in Crime and founder of MWA University, her novels include Trust Me, The Murder List, the Charlotte McNally series (starting with Prime Time), and the Jane Ryland series (which begins with The Other Woman). Ryan lives in Boston with her husband, a nationally renowned civil rights and criminal defense attorney.
Loading...
or support indie stores by buying on