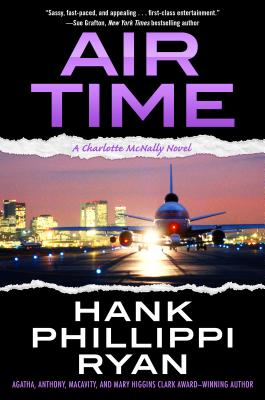 When savvy TV reporter Charlotte McNally enters the glamorous world of high fashion, she soon discovers that when the purses are fake--the danger is real. Charlotte can't tell the real from the false as she goes undercover to bring the couture counterfeiters to justice and struggles to answer a life-changing question from a certain handsome professor.

The one thing Charlotte knows for sure is that the wrong choice could be the last decision she ever makes.

"Sassy, fast-paced, and appealing. This is first-class entertainment."--Sue Grafton, author of the Alphabet series

"Sassy, fast-paced, and appealing. This is first-class entertainment." - Sue Grafton, author of the Alphabet series

“The most fun I've had reading in a long time...with a heroine who's sexy, stylish, and smart. I loved it." - Nancy Pickard, award-winning author of Say No to Murder and The Virgin of Small Plains

HANK PHILLIPPI RYAN has won five Agatha Awards, in addition to the Anthony, Macavity, Daphne du Maurier, and Mary Higgins Clark Award for her bestselling mystery novels. As an investigative reporter, her work has resulted in new laws, criminals sent to prison, homes saved from foreclosure, and millions of dollars in restitution for victims and consumers. Along with her 36 Emmys and 14 Edward R. Murrow awards, Hank has received dozens of other honors for her ground-breaking journalism. A former president of Sisters in Crime and founder of MWA University, she lives in Boston with her husband, a nationally renowned civil rights and criminal defense attorney. She is the author of Trust Me, and the Jane Ryland series (The Other Woman, The Wrong Girl, Truth be Told, Say No More and What You See).
Loading...
or support indie stores by buying on