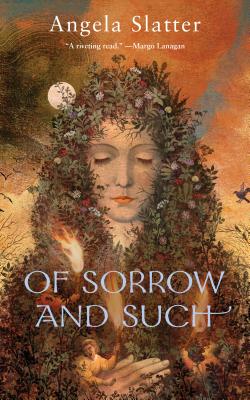 Of Sorrow and Such

Mistress Gideon is a witch. The locals of Edda's Meadow, if they suspect it of her, say nary a word-Gideon has been good to them, and it's always better to keep on her good side. Just in case.

When a foolish young shapeshifter goes against the wishes of her pack, and gets herself very publicly caught, the authorities find it impossible to deny the existence of the supernatural in their midst any longer; Gideon and her like are captured, bound for torture and a fiery end.

Should Gideon give up her sisters in return for a quick death? Or can she turn the situation to her advantage?

PRAISE FOR OF SORROW AND SUCH

"Of Sorrow and Such takes you to dark, unsettling places. Angela Slatter's magic is earthy, bodily and beleaguered; in the hands of tough, clever Patience Gideon it's a powerful instrument for wresting justice from a hostile world. A riveting read." — Margo Lanagan, World Fantasy Award winning author of Black Juice and Sea-Hearts


Praise For Of Sorrow and Such…

"Of Sorrow And Such is a haunting story of women and witches in a world of men, and the sacrifices and compromises they are forced to make. 5/5" — Geek Syndicate

"Of Sorrow and Such is a superb work of fiction... Without doubt, Slatter is at the top of her game." — Peter Tennant, Black Static

Specialising in dark fantasy and horror, Angela Slatter is the author of the Aurealis Award-winning The Girl with No Hands and Other Tales, the World Fantasy Award finalist Sourdough and Other Stories, Aurealis finalist Midnight and Moonshine (with Lisa L. Hannett), among others. She is the first Australian to win a British Fantasy Award, holds an MA and a PhD in Creative Writing, is a graduate of Clarion South and the Tin House Summer Writers Workshop, and was an inaugural Queensland Writers Fellow.
Loading...
or support indie stores by buying on