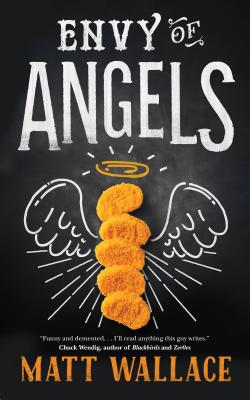 In New York, eating out can be hell.

Everyone loves a well-catered event, and the supernatural community is no different, but where do demons go to satisfy their culinary cravings?

Welcome to Sin du Jour - where devils on horseback are the clients, not the dish.

PRAISE FOR ENVY OF ANGELS:

"Matt Wallace tells a raucous, riotous tale of culinary madness - a jaw-dropping horror-fantasy restaurateur Thunderdome that makes the 'monkey brain' scene in Temple of Doom look like something you'd see on Nickelodeon. It's like I dropped a heroic dose of acid and turned on the Food Network for eight hours. It's funny and demented and sticks in you like a pinbone. Matt Wallace writes like someone just jammed a needle full of adrenaline in his heart - and then, in yours. From this point forward, I'll read anything this guy writes." — Chuck Wendig, author of Blackbirds and Zer0es


Praise For Envy of Angels: A Sin du Jour Affair…

“Quite a bit is packed into this short read, including warring demon clans, angels, zombie clowns, and even some sneaky commentary on consumer culture, topped with a healthy helping of satire. The fast pace and quirky characters make for a zippy read, and there’s a clever twist at the end that will leave readers grinning and hoping for more stories featuring the Sin du Jour gang.” —Publishers Weekly