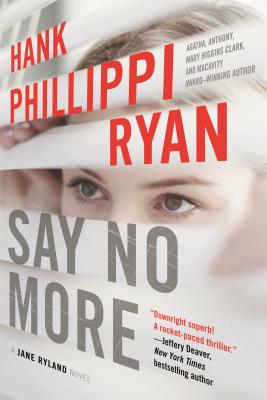 When Boston reporter Jane Ryland reports a hit and run, she soon learns she saw more than a car crash—she witnessed the collapse of an alibi. Working on an expose of sexual assaults on college campuses for the station’s new documentary unit, Jane’s just convinced a date rape victim to reveal her heartbreaking experience on camera. However, a disturbing anonymous message—SAY NO MORE—has Jane really and truly scared.

Homicide detective Jake Brogan is on the hunt for the murderer of Avery Morgan, a hot-shot Hollywood screenwriter. Her year as a college guest lecturer just ended at the bottom of her swimming pool in the tight-knit and tight-lipped Boston community called The Reserve. As Jake chips his way through a code of silence as shatterproof as any street gang, he’ll learn that one newcomer to the neighborhood may have a secret of her own.

A young woman faces a life-changing decision—should she go public about her assault? Jane and Jake—now semi-secretly engaged and beginning to reveal their relationship to the world—are both on a quest for answers as they try to balance the consequences of the truth.


Praise For Say No More: A Jane Ryland Novel…

"Ryan uses a complex, multifaceted plot to deliver an unflinching look at college sexual assault and examine the “hard line between journalism and law enforcement.” The tension mounts as the action builds to a conclusion that thrills and gratifies. " - Publishers Weekly

USA Today bestselling author HANK PHILLIPPI RYAN has won five Agatha Awards in addition to Anthony, Macavity, Daphne du Maurier, and Mary Higgins Clark Awards. As on-air investigative reporter for Boston's WHDH-TV, she's won 36 Emmys and many more journalism honors, and her work has resulted in new laws, criminals sent to prison, homes saved from foreclosure, and millions of dollars in restitution for victims and consumers. A past president of National Sisters in Crime and founder of MWA University, her novels include Trust Me, The Murder List, the Charlotte McNally series (starting with Prime Time), and the Jane Ryland series (which begins with The Other Woman). Ryan lives in Boston with her husband, a nationally renowned civil rights and criminal defense attorney.
Loading...
or
Not Currently Available for Direct Purchase