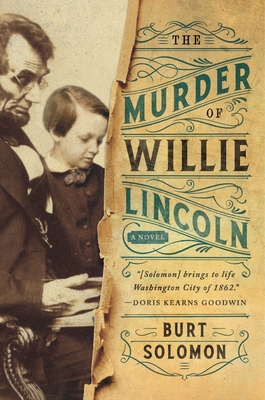 The Murder of Willie Lincoln

The Murder of Willie Lincoln is an exciting historical fiction debut by award-winning journalist Burt Solomon.

Then a message arrives, suggesting that murder, not illness, caused Willie’s death. Lincoln asks John Hay, his trusted aide, to investigate. Hay, a boxer and a poet, is an adventurous, irreverent, skeptical, even cynical young man who is as close to Lincoln as a son.

The more Hay unearths, the more daunting his task seems. Suspicions of a secessionist conspiracy within the Executive Mansion itself. A threat to Lincoln’s surviving sons. An extortion attempt against the president’s hellcat of a wife. As the war rages on, John Hay chases the truth of Willie’s murder through the loftiest and lowest corners of Washington City.

As he closes in, he discovers just how far Lincoln’s enemies will go to keep him silent.


Praise For The Murder of Willie Lincoln: A Novel…

Burt Solomon is a contributing editor for The Atlantic and National Journal, where he has covered the White House and many other aspects of Washington life. In 1991 he won the Gerald R. Ford Prize for Distinguished Reporting on the Presidency. He is also the author of the acclaimed Where They Ain't, a history of baseball in the 1890s. Solomon, his wife, and their two children live inside the Beltway. The Murder of Willie Lincoln is his first novel.
Loading...
or
Not Currently Available for Direct Purchase