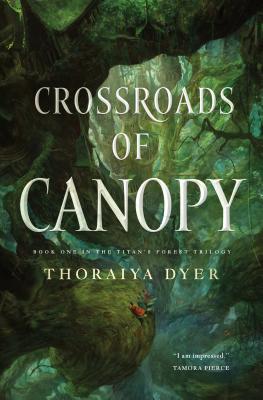 “I am impressed. A unique, gorgeous, and dangerous world, a stubborn female hero, and a writer to watch!” – Tamora Pierce

But achieving greatness is more difficult than she thinks.

Her hopes rest on becoming the next bodyguard to Audblayin, the rain forest’s divine ruler of growth and fertility. But to earn that title, Unar must embark on a dangerous quest into the shadowy depths beneath the treetops. Down below, she must confront enemy tribesmen, battle notoriously giant monsters, and master frightening new magic.

Most importantly, Unar must forget all the truths she had sworn her life to uphold… and be willing to risk destroying the very home she loves to seize her destiny.


Praise For Crossroads of Canopy: A Titan's Forest novel…

“Sydney’s Thoraiya Dyer is an accomplished writer of short stories and her skills successfully make the leap into the complex fantasy world of this, her debut novel....The story unfolds slowly as Dyer parts the leaves of her world and allows Unar’s ambitions to germinate. The society and environment are wonderfully depicted in what is an engaging and beautifully wrought coming-of-age story.” —Herald Sun (Australia)

“Dyer writes with accomplished ease, her prose style evocative without beingneedlessly ornate....All in all, Crossroads of Canopy is an incrediblyaccomplished debut, and one I thoroughly recommend.”— Strange Horizons

THORAIYA DYER is an Australian writer whose more than 30 short stories, as well as a novella and short fiction collection published since 2008 have racked up 7 wins from 17 Aurealis and Ditmar Award nominations between them. Her debut fantasy TITAN'S FOREST TRILOGY is published by Tor Books.
Loading...
or
Not Currently Available for Direct Purchase