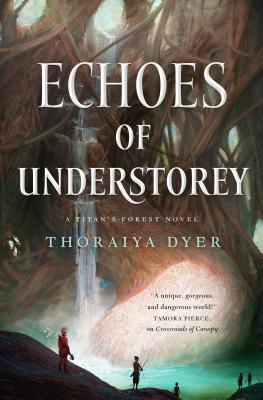 In the quest fantasy Echoes of Understorey, part of Thoraiya Dyer's extraordinary Titan's Forest series, trees loom large as skyscrapers, mortals can be reborn as gods, and a young woman finds herself part of an adventure that is destined to become legend….

Great deeds are expected of Imeris.

She has trained endlessly to become an extraordinary fighter. Yet she wants more than to compete against the glories of her divine sister and the charms of her courtesan brother.

Imeris thought she could prove her worth during a mission to kill a body-snatching sorceress, but fails disastrously. With death on her conscience and in hiding from her peers, Imeris is determined to find a way to redeem herself.

What she doesn’t expect is to be recruited in a Hunt for the Ages, chasing a terrifying, magical beast that will take all her skills to stop.


“I am majorly impressed. A unique, gorgeous, and dangerous world!”—Tamora Pierce

“Everything you expect from a great epic–quests, fearless warriors, gods born again.”—Brian Staveley, author of Skullsworn


Praise For Echoes of Understorey: A Titan's Forest Novel…

Praise for Crossroads of Canopy in the Titan's Forest series

THORAIYA DYER is an Australian writer whose more than 30 short stories, as well as a novella and short fiction collection published since 2008 have racked up 7 wins from 17 Aurealis and Ditmar Award nominations between them. Her debut fantasy Titan's Forest Trilogy is published by Tor Books.
Loading...
or
Not Currently Available for Direct Purchase