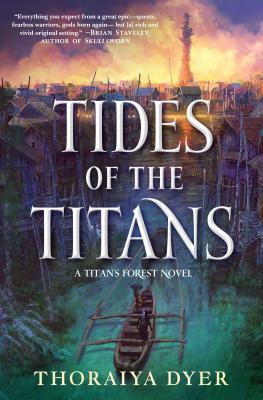 Tides of the Titans

In the quest fantasy Tides of the Titans, part of Aurealis and Ditmar Award-winning author Thoraiya Dyer's extraordinary Titan's Forest series, trees loom large as skyscrapers, mortals can be reborn as gods, and a young man travels to the far reaches of the land and beyond to unlock the Forest's hidden secrets...

Courtier, explorer, thief: Leaper is a man of many skills, but none of his talents satisfy the yearning in his heart for the Queen of Airakland, the ruler of a thunder-clashed kingdom.

Their affair is cut too short, however, when she is murdered. But who was the assassin? A political rival? The jealous king? Or, perhaps, the god of thunder who oversees them all?

Distraught, Leaper vows revenge, but little does he realize that his mission will lead him away from his forest home, across the vast floodplains, and to the edges of time and myth itself.

Praise for Crossroads of Canopy

“I am majorly impressed. A unique, gorgeous, and dangerous world!”—Tamora Pierce

“Everything you expect from a great epic–quests, fearless warriors, gods born again.”—Brian Staveley, author of The Chronicles of the Unhewn Throne


Praise For Tides of the Titans: A Titan's Forest Novel…

“Dyer’s most accomplished book, and it is both quenching and tantalizing, leaving the reader satisfied with the experience and enthusiastic about the next installment. Extremely absorbing.”—Locus

Praise for the Titan's Forest series

THORAIYA DYER is an Australian writer whose more than 30 short stories, as well as a novella and short fiction collection published since 2008 have racked up 7 wins from 17 Aurealis and Ditmar Award nominations between them. Her debut fantasy Titan's Forest Trilogy is published by Tor Books.
Loading...
or support indie stores by buying on