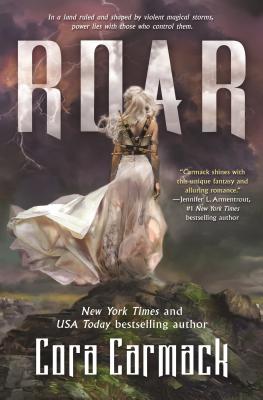 Challenge a tempest. Survive it. And you become its master.

Legend says that Aurora Pavan’s ancestors first gained their magic by facing a storm and stealing part of its essence. Aurora has been groomed to be the perfect queen…but she’s yet to show any trace of the magic she’ll need to protect her people.

To keep her secret and save her crown, she’ll have to marry a dark and brooding Stormling prince from another kingdom: He’ll guarantee her spot as the next queen and be the champion her people need to remain safe.

But the more Aurora uncovers about him, the more a future with him frightens her.

When a handsome young storm hunter reveals he was born without magic, but possesses it now, Aurora realizes there’s a third option for her future besides ruin or marriage…

She might not have magic now, but she can steal it if she’s brave enough.

“A rich and unforgettable fantasy forged from the power of storms, the danger of secrets, and the magic of Cora Carmack’s imagination.”—Kami Garcia, #1 New York Times bestselling author

“Well worth the wait…It crushed all of my expectations with gusto, and surprised me more than once.”—Hypable


Praise For Roar: A Stormheart Novel…

“I am typically not a fantasy reader, but Roar convinced me to read more. Cora Carmack created a beautiful world and I felt like I was transported to Pavan with her vivid descriptions of the city. I was left wanting more and I can't to find out what happens with the rest of her characters.”—Chelsea Riela, New York Public Library

“In her electrifying YA debut Roar, Cora Carmack creates a stormy fantasy full of adventure featuring a charismatic ensemble cast. Roar introduces YA readers to Cora’s signature talent for balancing authentic characters and a captivating romance, this time set in a striking new world that will sweep readers away.”—Mary Hinson, Irving Public Library and Mary Had A Little Book Blog

Cora Carmack has done a multitude of things in her life–boring jobs (retail), fun jobs (theatre), stressful jobs (teaching), and dream jobs (writing). Raised in a small Texas town, she now lives in New York City and Texas, and spends her time writing, traveling, and marathoning various television shows on Netflix. Her first book, Losing It, was a New York Times and USA Today bestseller, and her subsequent books were also hits.
Loading...
or
Not Currently Available for Direct Purchase