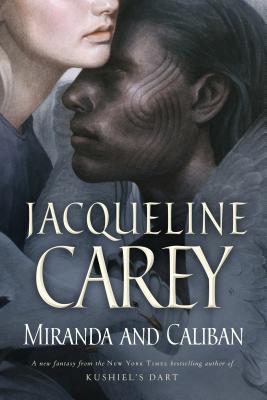 Miranda and Caliban is bestselling fantasy author Jacqueline Carey’s gorgeous retelling of The Tempest. With hypnotic prose and a wild imagination, Carey explores the themes of twisted love and unchecked power that lie at the heart of Shakespeare’s masterpiece, while serving up a fresh take on the play's iconic characters.

A lovely girl grows up in isolation where her father, a powerful magus, has spirited them to in order to keep them safe.

We all know the tale of Prospero's quest for revenge, but what of Miranda? Or Caliban, the so-called savage Prospero chained to his will?

In this incredible retelling of the fantastical tale, Jacqueline Carey shows readers the other side of the coin—the dutiful and tenderhearted Miranda, who loves her father but is terribly lonely. And Caliban, the strange and feral boy Prospero has bewitched to serve him. The two find solace and companionship in each other as Prospero weaves his magic and dreams of revenge.

Always under Prospero’s jealous eye, Miranda and Caliban battle the dark, unknowable forces that bind them to the island even as the pangs of adolescence create a new awareness of each other and their doomed relationship.


Praise For Miranda and Caliban…

“In this stand-alone, Carey evokes the same stunning worldbuilding and imagery of her "Kushiel's Legacy" and "Sundering" series, as she stirs new emotions from an old story and reveals another side to Shakespeare's epic play.”—Library Journal (starred review)

“Carey turns Shakespeare’s The Tempest on its head, in ways that are always supportable by the original text, with this brilliant deconstruction. The foreordained pattern of the play mixes beautifully with Carey’s intricate characterization and eye for sensory detail, building mercilessly to dazzling, and devastating, tragic effect.”—Publishers Weekly (starred review)

“An eye-opening departure from her previous fantasy yarns, Carey re imagines the back story of Shakespeare’s The Tempest as a tale of star-crossed lovers…[Carey] transforms the largely passive Shakespearean Miranda into a dutiful yet dignified and ultimately tragic figure…Intriguing and impressive while remaining inextricable from its dramatic context.”—Kirkus Reviews

“Infused with dark magic, broken trust, and lost innocence…Miranda and Caliban, both narrators with distinct voices, are given rich inner lives through Carey’s delicate, sensitive portrayal.”—Booklist