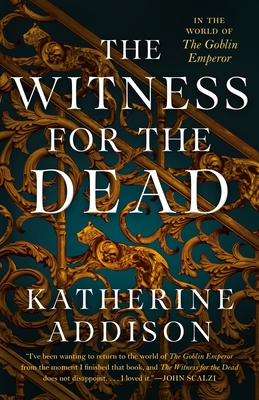 The Witness for the Dead (The Cemeteries of Amalo #1)

"At once intimate and literally operatic, it's everything I love about Katherine Addison's writing, in ways I didn't know to expect. I loved it." —John Scalzi

Katherine Addison returns to the glittering world she created for her beloved novel, The Goblin Emperor, in this stand-alone sequel

When the young half-goblin emperor Maia sought to learn who had set the bombs that killed his father and half-brothers, he turned to an obscure resident of his father’s Court, a Prelate of Ulis and a Witness for the Dead. Thara Celehar found the truth, though it did him no good to discover it. He lost his place as a retainer of his cousin the former Empress, and made far too many enemies among the many factions vying for power in the new Court. The favor of the Emperor is a dangerous coin.

Now Celehar lives in the city of Amalo, far from the Court though not exactly in exile. He has not escaped from politics, but his position gives him the ability to serve the common people of the city, which is his preference. He lives modestly, but his decency and fundamental honesty will not permit him to live quietly. As a Witness for the Dead, he can, sometimes, speak to the recently dead: see the last thing they saw, know the last thought they had, experience the last thing they felt. It is his duty use that ability to resolve disputes, to ascertain the intent of the dead, to find the killers of the murdered.

Celehar’s skills now lead him out of the quiet and into a morass of treachery, murder, and injustice. No matter his own background with the imperial house, Celehar will stand with the commoners, and possibly find a light in the darkness.

Katherine Addison has created a fantastic world for these books – wide and deep and true.

Within THE CHRONICLES OF OSRETH

"I've been wanting to return to the world of 'The Goblin Emperor' from the moment I finished that book, and 'The Witness For the Dead' does not disappoint. At once intimate and literally operatic, it's everything I love about Katherine Addison's writing, in ways I didn't know to expect. I loved it." — John Scalzi

"The follow-up to the acclaimed The Goblin Emperor brings back a favorite character and expands the elaborate world Addison has created. Fans of the first book—and new readers—will find this novel delightful and immersive" — Library Journal

KATHERINE ADDISON’s short fiction has been selected by The Year’s Best Fantasy and Horror and The Year’s Best Science Fiction. Her novel, The Goblin Emperor, won a Locus Award. As Sarah Monette, she is the author of the Doctrine of Labyrinths series and co-author, with Elizabeth Bear, of the Iskryne series. She lives near Madison, Wisconsin.
Loading...
or support indie stores by buying on