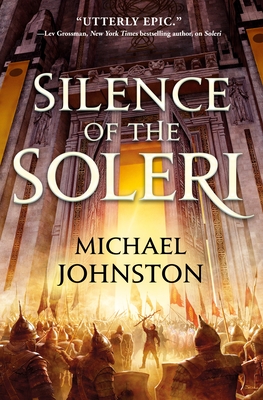 Silence of the Soleri (The Amber Throne #2)

Silence of the Soleri is the action-packed sequel to the epic fantasy novel Lev Grossman calls "bloody and utterly epic."

Solus celebrates the Opening of the Mundus, a two-day holiday for the dead, but the city of the Soleri is hardly in need of diversion. A legion of traitors, led by a former captain of the Soleri military, rallies at the capital’s ancient walls. And inside those fortifications, trapped by circumstance, a second army fights for its very existence.

In a world inspired by ancient Egyptian history and King Lear, this follow-up to Michael Johnston's Soleri, finds Solus besieged from within as well as without and the Hark-Wadi family is stuck at the heart of the conflict.


Praise For Silence of the Soleri (The Amber Throne #2)…

MICHAEL JOHNSTON has always been an avid reader of science fiction and fantasy. He studied architecture and ancient history at Lehigh University and earned a master’s degree in architecture from Columbia University. Michael worked as an architect in New York City before switching to writing full time. He is the co-author of the YA Heart of Dread trilogy (Frozen, Stolen, and Golden) with his wife Melissa de la Cruz and lives in Los Angeles with his wife and daughter.
Loading...
or
Not Currently Available for Direct Purchase