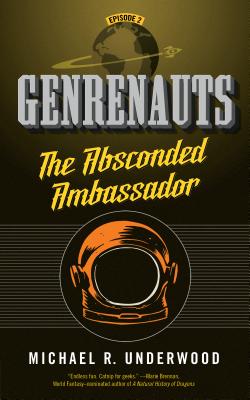 Rookie Genrenaut Leah Tang gets her first taste of space flight when the team scrambles to fix a story breach in Science Fiction World, the domain of starships, weird aliens, and galactic intrigue.

On the space station Ahura-3, Ambassador Kaylin Reed is on the verge of securing a peace treaty to guarantee the end of hostilities between some of the galaxy's most ferocious races. When Ambassador Reed is kidnapped the morning before the signing, it throws the station into chaos.

So now it’s up to Leah and her team to save the day and put the story to rights.

The second episode of Genrenauts, a science fiction series in novellas. If you like Leverage, Redshirts, or Quantum Leap, check out Genrenauts for a brand-new adventure.


"If you like the TV show Leverage or the books of Jasper Fforde, Genrenauts is absolutely the series for you. Exploring genre tropes while saving the world has never been more fun." — Between the Covers

Praise for Episode 1 in the series: THE SHOOTOUT SOLUTION