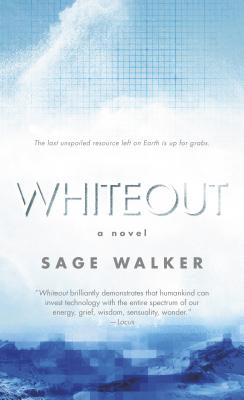 And daily living means a struggle to survive the effects of overpopulation, poverty, pollution, and hunger.

One last hope remains: Antarctica, the only source of pristine water and food left on the planet. Antarctica is protected from human exploitation by international treaty—and that treaty’s due for renegotiation.

The people who have the talents to influence the outcome of these negotiations run Edges, a company of media manipulators. They’ve been hired by one of the corporations for whom the current situation suits them just fine, and they’d like to keep it that way. This team knows that they have the skills to make whatever they want happen. But they also know that if they succeed, they might doom the planet.


Praise For Whiteout: A Novel…

“Walker’s consummate skill plunges the reader into this strange new world with hardly a ripple, and it is a fortunate fall.” –Fantasy & Science Fiction

SAGE WALKER is the author of Whiteout, which garnered critical acclaim and won the Locus Award for Best First Novel. She was born in Oklahoma and grew up steeped in simile and sultry south wind from the Gulf. She entered college as a music major and exited with a B.S. in Zoology and eventually a M.D. A long time Taos resident, her company established the first full-time Emergency Physician coverage in hospitals in Taos, Los Alamos, and Santa Fe. She stopped practicing in 1987 and describes herself as a burned-out ER doc who enjoys wilderness, solitude, good company...and telling stories.
Loading...
or
Not Currently Available for Direct Purchase