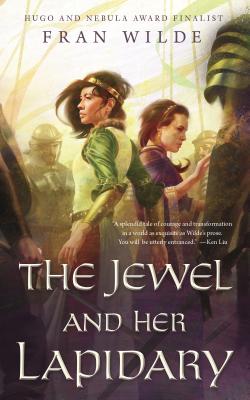 The Jewel and Her Lapidary (The Jewel Series #1)

From Fran Wilde, the Andre Norton and Compton Crook Award-winning author of Updraft.

The kingdom in the Valley has long sheltered under the protection of its Jewels and Lapidaries, the people bound to singing gemstones with the power to reshape hills, move rivers, and warp minds. That power has kept the peace and tranquility, and the kingdom has flourished.

Jewel Lin and her Lapidary Sima may be the last to enjoy that peace.

The Jeweled Court has been betrayed. As screaming raiders sweep down from the mountains, and Lapidary servants shatter under the pressure, the last princess of the Valley will have to summon up a strength she’s never known. If she can assume her royal dignity, and if Sima can master the most dangerous gemstone in the land, they may be able to survive.


Praise For The Jewel and Her Lapidary (The Jewel Series #1)…

PRAISE FOR THE JEWEL AND HER LAPIDARY AND FRAN WILDE

“The Jewel and Her Lapidary is a splendid tale of courage and transformation in a world as exquisite as Wilde's prose. You will be utterly entranced.” — Ken Liu, Hugo, Nebula, and World Fantasy Award winner and author of The Grace of Kings

"The Jewel and Her Lapidary is a sharp, glittering novella about friendship, family, loyalty, and mental instability. Two young women are faced with the destruction of all their old certainties, their lives, and their kingdom. The heart of the story is their friendship for and loyalty to each other – even if the price of that loyalty is sacrifice and pain." —Locus

Fran Wilde's acclaimed short stories have appeared in Asimov's, Nature, and Beneath Ceaseless Skies. Aside from her writing career, she has worked as a science and engineering writer, as a programmer and game developer, as a sailing assistant, and as a jeweler's assistant. She lives in Pennsylvania with her family. She is the author of Updraft.
Loading...
or support indie stores by buying on