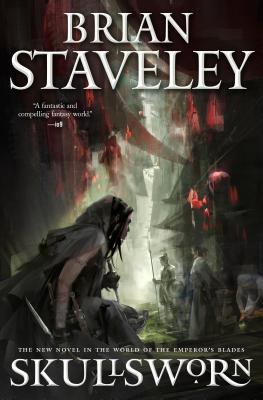 Brian Staveley’s new standalone, Skullsworn, returns to the critically acclaimed Chronicle of the Unhewn Throne universe, following a priestess-assassin for the God of Death.

Pyrre Lakatur is not, to her mind, an assassin, not a murderer—she is a priestess. At least, she will be once she passes her final trial.

The problem isn’t the killing. The problem, rather, is love. For to complete her trial, Pyrre has ten days to kill the seven people enumerated in an ancient song, including “the one who made your mind and body sing with love / who will not come again.”

Pyrre isn’t sure she’s ever been in love. And if she fails to find someone who can draw such passion from her, or fails to kill that someone, her order will give her to their god, the God of Death. Pyrre’s not afraid to die, but she hates to fail, and so, as her trial is set to begin, she returns to the city of her birth in the hope of finding love . . . and ending it on the edge of her sword.


Praise For Skullsworn: A Novel in the World of The Emperor's Blades (Chronicle of the Unhewn Throne)…

“Staveley has quickly become one of my favorite fantasy authors, and his latest doesn't disappoint. Skullsworn is a brilliant new chapter in a fabulous series." —V. E. Schwab, New York Times bestselling author

“A warm, funny, character-focused novel which is also darkly charming, bloody, and lethal. It was very, very hard to put down, and had an emotional punch to match its high adrenaline moments.” —Sci Fi and Fantasy Reviews

“A stunning prequel that actually lives up to the original trilogy's legacy […] Staveley has proven himself to be a master of world-building, character development, and sheer storytelling.” —Beauty in Ruins

“Full of surprises […} more inventive and grisly than I could have imagined.” —Fantasy Faction, 9/10 stars

“Do yourself a favor: read Skullsworn.You won’t regret it.” –GrimdarkMAGAZINE

“Highly recommended, especially for fans of female characters that like to kick ass and not follow the rules.” –The Speculative Herald

“A great read with tons of action and humor… I loved it.” –The Blogin’ Hobgoblin

“An outstanding novel on every level.” –TheBibliosanctum

“A must for fantasy fans” –Books of All Kinds

“A fantastic standalone book with a very satisfying conclusion – well thought out and written incredibly well.” —The Bookbag