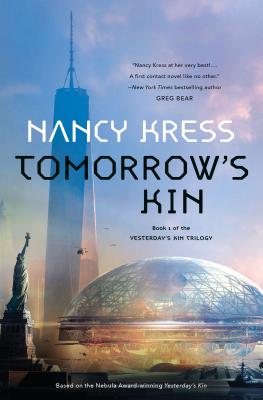 Book 1 of the Yesterday's Kin Trilogy

Tomorrow's Kin is the first volume in and all new hard science fiction trilogy by Nancy Kress based on the Nebula Award-winning Yesterday's Kin.

The aliens have arrived... they've landed their Embassy ship on a platform in New York Harbor, and will only speak with the United Nations. They say that their world is so different from Earth, in terms of gravity and atmosphere, that they cannot leave their ship. The population of Earth has erupted in fear and speculation.

One day Dr. Marianne Jenner, an obscure scientist working with the human genome, receives an invitation that she cannot refuse. The Secret Service arrives at her college to escort her to New York, for she has been invited, along with the Secretary General of the UN and a few other ambassadors, to visit the alien Embassy.

The truth is about to be revealed. Earth’s most elite scientists have ten months to prevent a disaster—and not everyone is willing to wait.


Praise For Tomorrow's Kin: Book 1 of the Yesterday's Kin Trilogy…

“Tomorrow’s Kin’s begins in a way that readers of her earlier writing and Sir Arthur C Clarke’s Childhood’s End will recognise—the arrival to Earth of aliens—but then, like the best of Clarke, transcends from this to something new and contemporary.”—SFF World

Nancy Kress is the author of more than thirty books, including novels, short story collections, and nonfiction books about writing. Her work has won six Nebulas, two Hugos, a Sturgeon, and the John W. Campbell Memorial Award. She expanded two of her Nebula Award winners into successful trilogies: the novella Yesterday's Kin into a trilogy (Tomorrow's Kin, If Tomorrow Comes, and Terran Tomorrow), and the novelette "The Flowers of Aulit Prison" into the Probability Trilogy. Kress’s work has been translated into two dozen languages, including Klingon, none of which she can read. She lives in Seattle with her husband, writer Jack Skillingstead, and Cosette, the world’s most spoiled toy poodle.
Loading...
or
Not Currently Available for Direct Purchase