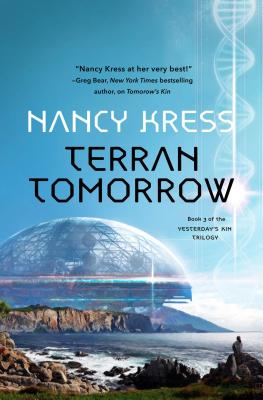 The diplomatic mission from Earth to World ended in disaster, as the Earth scientists discovered that the Worlders were not the scientifically advanced culture they believed. Though they brought a limited quantity of the vaccine against the deadly spore cloud, there was no way to make enough to vaccinate more than a few dozen. The Earth scientists, and surviving diplomats, fled back to Earth.

But once home, after the twenty-eight-year gap caused by the space ship transit, they find an Earth changed almost beyond recognition. In the aftermath of the spore cloud plague, the human race has been reduced to only a few million isolated survivors. The knowledge brought back by Marianne Jenner and her staff may not be enough to turn the tide of ongoing biological warfare.

“[Kress] never seems quite satisfied with the resolutions demanded by the beginning-middle-end structure of conventional storytelling. Instead, each apparent resolution or escape or victory is actually a new situation with its own set of problems, dangers, contradictions, and unintended consequences. The worlds of her stories just won’t sit still.”—Locus

Nancy Kress is the author of more than thirty books, including novels, short story collections, and nonfiction books about writing. Her work has won six Nebulas, two Hugos, a Sturgeon, and the John W. Campbell Memorial Award. She expanded two of her Nebula Award winners into successful trilogies: the novella Yesterday's Kin into a trilogy (Tomorrow's Kin, If Tomorrow Comes, and Terran Tomorrow), and the novelette "The Flowers of Aulit Prison" into the Probability Trilogy. Kress’s work has been translated into two dozen languages, including Klingon, none of which she can read. She lives in Seattle with her husband, writer Jack Skillingstead, and Cosette, the world’s most spoiled toy poodle.
Loading...
or
Not Currently Available for Direct Purchase