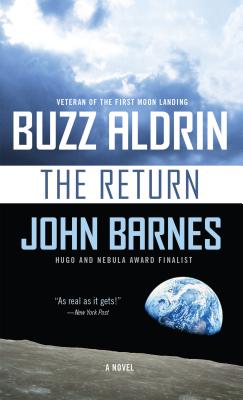 The Return is a tale about the kind of space adventure that could happen today--and that will happen tomorrow. As told by Buzz Aldrin, who's been there...and who's already helped change the world.

Former astronaut Scott Blackstone's dream of opening outer space to visits from everyday people is under attack. His pilot program has been marred by a fatal accident, he's out of a job, and he's being sued for a billions dollars. And it's beginning to seem that the "accident" wasn't at all accidental.

Then the endless conflict between India and Pakistan heats up...and Pakistan explodes a nuclear device in the upper atmosphere, frying electronics on earth and in space, and putting the crew of the international Space Station at risk. With the Shuttle fleet grounded, only a secret skunkworks project known to Scott and his old friends can save the space station's stranded crew.

Dr. Buzz Aldrin was watched by the largest television audience in history as he and Neil Armstrong be-came the first humans to walk on the Moon. He is a graduate of the Massachusetts Institute of Technology, a recipient of the Presidential Medal of Freedom, and one of the world's best-known advocates for the exploration of outer space. He lives in Los Angeles.

John Barnes is the award-winning author of many Science Fiction novels, including Orbital Resonance, A Million Open Doors, and The Sky So Big and Black. With Buzz Aldrin, he wrote Encounter with Tiber and The Return. He lives in Colorado.
Loading...
or
Not Currently Available for Direct Purchase