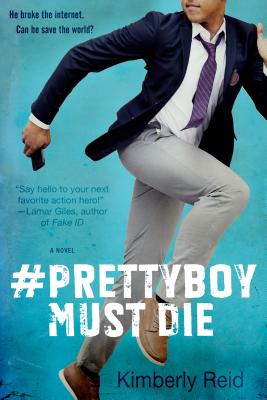 A CIA prodigy's cover is blown when he accidentally becomes an internet sensation in #Prettyboy Must Die, Kimberly Reid's fun, fast thriller inspired by the #Alexfromtarget story and perfect for fans of Alex Rider.

Because he’s not really Peter Smith. He’s Jake Morrow, former foster-kid turned CIA operative. After a massive screw-up on his first mission, he's on a pity assignment, a dozen hit lists and now, social media, apparently. As #Prettyboy, of all freaking things.


Praise For Prettyboy Must Die: A Novel…

"Kimberly Reid’s immensely likable hero hooked me from the first page, and twist after twist kept me wondering who I could trust all the way to the end of this clever thriller. #Prettyboy is #reallyfun!" -- Maggie Hall, author of The Conspiracy of Us

“A fast-paced thriller crackling with romance, twists, and international intrigue. What’s not to love?”--Kara Thomas, author of The Darkest Corners

Kimberly Reid is the author of thrillers and mysteries for young adults, including Prettyboy Must Die and Perfect Liars as well as the Langdon Prep mystery series. Writing as Kim Reid, she won the Colorado Book Award for creative nonfiction for her memoir, No Place Safe, which has been optioned for television by ABC Signature Studios and Oscar-winning screenwriter John Ridley (12 Years a Slave).
Loading...
or
Not Currently Available for Direct Purchase