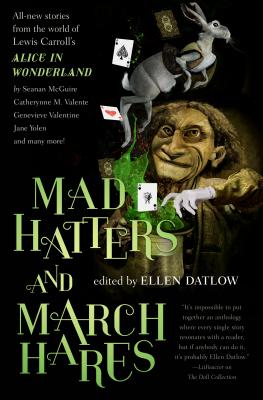 From master anthologist Ellen Datlow comes an all-original of weird tales inspired by the strangeness of Lewis Carroll’s Alice’s Adventures in Wonderland and Through the Looking-Glass and What Alice Found There.

Between the hallucinogenic, weird, imaginative wordplay and the brilliant mathematical puzzles and social satire, Alice has been read, enjoyed, and savored by every generation since its publication. Datlow asked eighteen of the most brilliant and acclaimed writers working today to dream up stories inspired by all the strange events and surreal characters found in Wonderland.


Praise For Mad Hatters and March Hares: All-New Stories from the World of Lewis Carroll's Alice in Wonderland…

Praise for The Doll Collection:

“Dolls, like clowns, are one of the totems of childhood that somehow seem sinister in adulthood. Award-winning editor Datlow has arranged a strong, themed anthology without ever resorting to the "evil doll" cliché of horror movies. There isn't a bad story in the bunch.” —Library Journal

"Truly amazing authors takes readers into that dark and frightening 'doll' world, and for those who are not yet scared silly of the porcelain faces, you will be after this . . . Five stars . . . and leave on the lights." —Suspense Magazine

"A superb sampling of urban fantasy... You will have fun with all twenty stories."—Booklist on Naked City

"This is a treasure chest. Open it and revel in its riches."—Kirkus Reviews, starred review on The Faery Reel

"An often sophisticated view of the world [and] a real sense of how powerful nature can be in its various guises." —School Library Journal on The Green Man

"There are some genuine gems in this enticing collection.... A tasty treat for fantasy fans." —Booklist on The Green Man

"The stories run the gamut from humorous to tragic... Despite differing styles, the stories flow smoothly from one to the next. Windling's fascinating introduction details the history of shape-shifters in legends from around the globe. This collection will appeal to fantasy lovers as it provides both stories by beloved authors and exciting new voices to discover." -- School Library Journal on The Beastly Bride

"A potent brew of fairy tales spiked with feminism. These intoxicating delights are not meant for children or the timid... No matter which tour you take through this frightening and dark enchanted wood, Datlow and Windling again prove themselves the best guides." —Kirkus Reviews on Black Thorn, White Rose

Ellen Datlow is a winner of multiple World Fantasy Awards, two Hugo Awards for Best Editor, two Bram Stoker Awards, the International Horror Guild Award, and the Shirley Jackson Award. She was named recipient of the 2007 Karl Edward Wagner Award, given at the British Fantasy Convention for "outstanding contribution to the genre." In 2014, she was named Lifetime Achievement Winner of the World Fantasy Award.   In a career spanning more than twenty-five years, she has been the long-time fiction editor of Omni and more recently the fiction editor of SCIFI.COM. She has edited many successful anthologies, including Blood Is Not Enough, A Whisper of Blood, Alien Sex, Blood and Other Cravings, and, with Terri Windling, Sirens, Queen Victoria's Book of Spells, Snow White, Blood Red and five other titles in their adult Fairy Tales anthology series; The Green Man, The Faery Reel, and The Coyote Road for young adults; and, for younger readers, A Wolf at the Door, Swan Sister, and Troll's Eye View. She also co-edits the Year's Best Fantasy and Horror series. Ellen Datlow lives in Manhattan.
Loading...
or
Not Currently Available for Direct Purchase