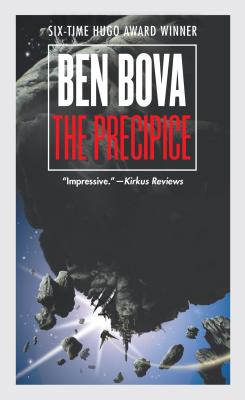 Six-time Hugo Award winner Ben Bova chronicles the saga of humankind's expansion beyond the solar system in The Precipice.

Once, Dan Randolph was one of the richest men on Earth. Now the planet is spiraling into environmental disaster, with floods and earthquakes destroying the lives of millions. Randolph knows the energy and natural resources of space can save Earth's economy, but the price may be the loss of the only thing he has left--the company he founded, Astro Manufacturing.

Martin Humphries, fabulously wealthy heir of the Humphries Trust, also knows that space-based industry is the way of the future. But unlike Randolph, he doesn't care if Earth perishes in the process. And he knows that the perfect bait to ensnare Dan Randolph--and take control of Astro--is his revolutionary new fusion propulsion system.

As Randolph--accompanied by two fascinating women who are also brilliant astronauts--flies out to the Asteroid Belt on a grand tour aboard a fusion-propelled spacecraft, Humphries makes his move. The future of mankind lies in Randolph's hands.

The Asteroid Wars have begun.

Praise For The Precipice: A Novel (Asteroid Wars #1)…