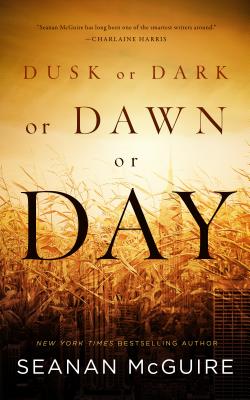 Dusk or Dark or Dawn or Day

When her sister Patty died, Jenna blamed herself. When Jenna died, she blamed herself for that, too. Unfortunately Jenna died too soon. Living or dead, every soul is promised a certain amount of time, and when Jenna passed she found a heavy debt of time in her record. Unwilling to simply steal that time from the living, Jenna earns every day she leeches with volunteer work at a suicide prevention hotline.

But something has come for the ghosts of New York, something beyond reason, beyond death, beyond hope; something that can bind ghosts to mirrors and make them do its bidding. Only Jenna stands in its way.


Praise For Dusk or Dark or Dawn or Day…

"Sure to still be on my list of the best for 2017 at the end of the year. McGuire’s very original take on ghosts (and witchcraft, for that matter) produces a moving tale.’’ —Locus

"This tightly paced adventure will win hearts with a charming protagonist and a well-earned ending." —Publishers Weekly

"A spooky, atmospheric love letter to New York and its shifting moods, skylines and people." — Sophia McDougall, author of the Romanitas trilogy