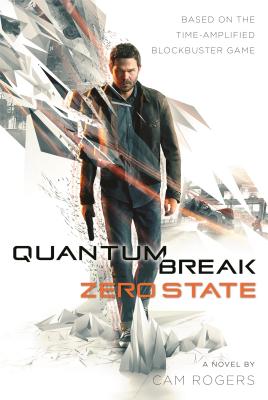 From Remedy Entertainment, the masters of cinematic action games such as Max Payne and Alan Wake, comes a gripping novelization of this time-amplified suspenseful blockbuster. The Quantum Break experience is part game, part show—where decisions in one dramatically affect the other. Both experiences share the same incredible cast of actors who have played leading roles in Lost, X-Men, Game of Thrones and more.

The novel, Quantum Break: Zero State, is the story of the game’s hero, Jack Joyce, who, with his newly gained superpowers, fights the nefarious Monarch corporation to stop the end of time. Epic moments of destruction, frozen in chaotic “time stutters,” become playgrounds for intense combat and gripping story. The novel greatly expands on the game’s narrative, offering intriguing new timelines and characters to explore!

Cam Rogers is a novelist, game writer, and narrative designer. He has worked on Quantum Break and has written for The Walking Dead franchise. Born in Australia, he currently lives and works in Helsinki, Finland. He is the author of The Music of Razors (written as Cameron Rogers).
Loading...
or support indie stores by buying on