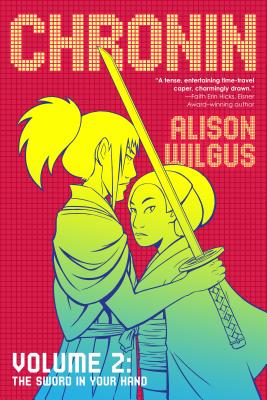 The Sword in Your Hand

Samurai Jack meets Back to the Future in Alison Wilgus’s Chronin Volume 2: The Sword in Your Hand, a thrilling conclusion to a time-bending graphic novel duology

Japan's history will never be the same. The timeline has veered off course with the abrupt deaths of prominent players in the nation's past, influencers who were supposed to start the Meiji Restoration. Now Mirai Yoshida, former Japanese-American undergrad turned samurai on the lam, may never find her way back to where she belongs.

Unless a high-stakes plan is enacted. With help from her newfound friends, Mirai must instigate a peasant uprising to correct the course of history. But in order to succeed, she faces a dangerous and powerful fellow time traveler, an enemy who accidentally glimpsed his country's destiny and didn't like what he saw.

Chronin, Volume 2: The Sword in Your Hand concludes the adrenaline-fueled adventure that asks: when time is of the essence, is it more important to save yourself or the future?

Follow the story from the beginning in Chronin, Vol #1: The Knife at Your Back!

Alison Wilgus is a Brooklyn-based bestselling writer, editor and cartoonist who's been working in comics for over a decade. She is the author of the SF graphic novel duology, Chronin (Tor Books), which NPR called “timeless in more ways than one,” and Book Riot called “magical,” and which has garnered a host of glowing reviews. Her middle grade graphic novel Science Comics: Flying Machines was named one of the National Science Teachers Association’s Best STEM Books for 2018, and was an Amazon Holiday Toy List Pick. Her next nonfiction graphic work, The Mars Challenge, is forthcoming from First Second. Her New York Times bestselling work has been published by DC Comics, Dark Horse, Del Rey, and Scholastic, and she served as a script and story writer for Cartoon Network's "Codename: Kids Next Door." In her spare time, she co-hosts a podcast about comics publishing called “Graphic Novel TK” with Gina Gagliano.

Praise For Chronin Volume 2: The Sword in Your Hand…

“The Sword In Your Hand is a heartfelt story about the wonder of finding a community that sees you as you see yourself even when you're very, very far from home. Ali Wilgus's clear, expressive artwork gives the powerful emotional beats of these characters' deepening relationships the space and nuance they need to breathe, drawing together the threads of this affecting time-travel journey into a tender, well-earned, and immensely satisfying conclusion.”—Carey Pietsch, artist and co-adapter of the New York Times-bestselling The Adventure Zone graphic novels

“Chronin is an elegantly rendered, insightfully layered time-travel adventure that creatively explores the complex tensions around identity, power, and constructions of history. This technically adept graphic novel showcases the power of the comics medium and gives us the gift of a wonderfully dangerous world that is filled with so many amazing possibilities!” —John Jennings, artist of New York Times bestselling Kindred: A Graphic Novel Adaptation

“I liked the fish-out-of-water premise, with history students getting stranded in history and discovering that their book knowledge doesn’t necessarily make it easier to survive in the past. There are some other surprises and twists in the story, so if you like time travel and samurai stories, it’s worth checking out!” —GeekDad

Previous praise for Chronin Volume 1: The Knife at Your Back

“Clever dialogue and detailed black-and-white images create an intense and moving story with plenty of heart and a mystery readers will want to solve.” —Publishers Weekly

“[T]he story has a truly fascinating premise and plumbs impressive depths, particularly in Kuji and Mirai’s arguments over rebel factions during the period, which raises thoughtful questions about how ideology influences how we view history as well as the dangers of romanticizing rebellion. Deepening mysteries about Mirai and Kuji’s time travel program make for a compelling cliffhanger ending to this genre-blending series starter.”—Booklist

“Chronin is a tense, entertaining time travel caper, charmingly drawn and filled with endearing, complicated characters that you can't help rooting for.” —Faith Erin Hicks, Eisner-Award winning author of The Adventures of Superhero Girl and The Nameless City trilogy

“A fascinating, intricate story, and Alison's love for the period is evident in every scene.” — Tony Cliff, author of Delilah Dirk series

“Chronin delivers a solid story that touches on the importance of identity and history, and how they go hand in hand. With its lush historical setting and an ear for sharp dialogue, Alison Wilgus's first solo outing shows the promise of a fresh voice to comics.” —Ethan Young, Eisner and Harvey Award-nominated author of Nanjing: The Burning City