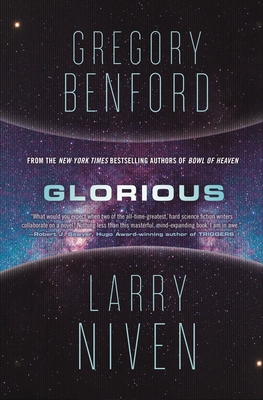 Tasked with exploring this brave, new, highly dangerous world, they must also deal with their own personal triumphs and conflicts.


Praise For Glorious: A Science Fiction Novel (Bowl of Heaven #3)…

"Niven and Benford? Of course it's great. Two grandmasters combined their talents and the result is, well, glorious. It's a proper end to an amazing trilogy." —Larry Bond, New York Times bestselling author of Arctic Gambit

"Benford and Niven have solved the Fermi Paradox! They have created fantastic, yet plausible worlds and aliens who are, at once, witty, wise, and wily…" —Dr. Don Erbschloe, Colonel USAF (ret.) and former Commander of Air Force Office of Scientific Research

"What sets Benford apart from most of the high-tech literary herd is his gift for characterization and language, his refusal to let gadgets overwhelm the people in his stories.... Benford never lets his characters become the animated cardboard cutouts that afflict too many hard science fiction stories." —San Francisco Chronicle

"Benford is a rarity: a scientist who writes with verve and insight not only about black holes and cosmic strings, but about human desires and fears." —The New York Times Book Review

Larry Niven is the award-winning author of the Ringworld series, along with many other science fiction masterpieces and fantasy including the Magic Goes Away series. His Beowulf's Children, co-authored with Jerry Pournelle and Steven Barnes, was a New York Times bestseller. He has received the Nebula Award, five Hugos, four Locus Awards, two Ditmars, the Prometheus, and the Robert A. Heinlein Award, among other honors. He lives in Chatsworth, California.
Loading...
or support indie stores by buying on