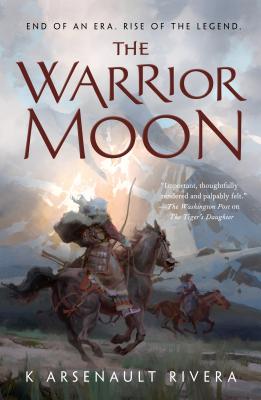 The Warrior Moon, the sequel to The Phoenix Empress and striking conclusion to K Arsenault Rivera's wildly buzzed about epic fantasy, which began with The Tiger's Daughter

Barsalayaa Shefali, famed Qorin adventurer, and the spoiled divine warrior empress, O-Shizuka, have survived fights with demon armies, garnered infamy, and ruled an empire. Raised together since birth, then forced into exile after their wedding, and reunited amidst a poisonous invasion—these bold warrior women have faced monumental adventures and catastrophic battles.

As they come closest to fulfilling the prophecy of generations—Shefali and Shizuka will face their greatest test yet.

"The Phoenix Empress expands and deepens the mysteries of this intricate and fully-realized fantasy world. I'm riveted by this story and can't wait for the next volume."—Martha Wells, author of the Murderbot Diaries series


Praise For The Warrior Moon (Ascendant #3)…

Praise for The Phoenix Empress

"The Tiger's Daughter was my favorite fantasy novel last year, telling the story of an epic quest through an original and engrossing perspective, and The Phoenix Empress expands and deepens the mysteries of this intricate and fully-realized fantasy world. I'm riveted by this story and can't wait for the next volume."—Martha Wells, author of the Murderbot Diaries series

“The second entry in this epic fantasy series (after The Tiger's Daughter) continues the intense worldbuilding and time-hopping prose of the first... Engrossing and memorable.” —Library Journal

"The sweeping, lush love story between the Qorin warrior Shefali and the warrior empress Shizuka continues." —Booklist on The Phoenix Empress

“Rich, expansive, and grounded in human truth. It is a story of star-crossed loves, of fate and power and passion, and it is simply exquisite." —V. E. Schwab, New York Times bestselling author of the Shades of Magic series

“An incredible debut that takes all my favorite fantasy elements and adds the queer romance I've been waiting for in my magical fiction for years. If you love women who love women standing side-by-side to face off against a seemingly-impervious foe, you will love The Tiger's Daughter.” —Sam Maggs, author of The Fangirl's Guide to the Galaxy and Wonder Women