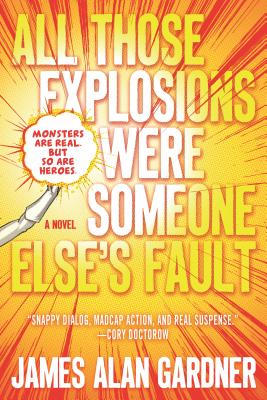 All Those Explosions Were Someone Else's Fault

Monsters are real.
But so are heroes.

Sparks are champions of weird science. Boasting capes and costumes and amazing super-powers that only make sense if you don’t think about them too hard, they fight an eternal battle for truth and justice . . . mostly.

Darklings are creatures of myth and magic: ghosts, vampires, were-beasts, and the like. Their very presence warps reality. Doors creak at their approach. Cobwebs gather where they linger.

Kim Lam is an ordinary college student until a freak scientific accident (what else?) transforms Kim and three housemates into Sparks—and drafts them into the never-ending war between the Light and Dark. They struggle to master their new abilities—and (of course) to design cool costumes and come up with great hero-names.

Turns out that “accident” was just the first salvo in a Mad Genius’s latest diabolical scheme. Now it’s up to four newbie heroes to save the day, before they even have a chance to figure out what their team’s name should be!


Praise For All Those Explosions Were Someone Else's Fault: A Novel…

"A very smart, funny, thrilling, and quite original science fictional treatment of magic by a master of both, featuring an irresistibly appealing heroine. " —Spider Robinson

"James Alan Gardner is a genius. He always knocks my socks off with his inventive use of language, wild imagination, and engaging storytelling, and this novel is his best yet. You'll love it—it's an absolute joy, managing to be funny, moving, and exciting all at once."—Robert J. Sawyer, Hugo Award-winning author of Quantum Night

James Alan Gardner is a 1989 graduate of the Clarion West Science Fiction Writers Workshop, and has had several science fiction stories and novellas appear in publications such as Isaac Asimov’s Science Fiction Magazine, Amazing Stories, and The Magazine of Fantasy and Science Fiction. He is the author of Expendable, Commitment Hour, Vigilant, Hunted, Ascending, Trapped, and Radiant. He was the grand prize winner of the 1989 Writers of the Future contest, has won the Aurora Award, and has been nominated for the Hugo and Nebula Awards. He lives in Canada.
Loading...
or support indie stores by buying on