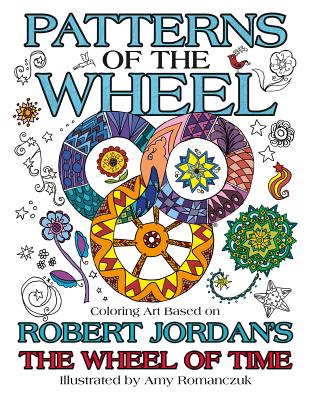 Patterns of the Wheel (Paperback)

Let the Dragon be drawn again on the winds of time. Patterns of the Wheel is an adult coloring book suitable for all ages featuring original art drawn from The Wheel of Time ®, a perfect gift for fans of Robert Jordan's fantasy epic.

Since its debut in 1990, The Wheel of Time by Robert Jordan has captivated millions of readers around the globe with its scope, originality, and compelling characters. Over the course of fifteen books and millions of words, the world that Jordan created grew in depth and complexity.

Now for the very first time, fans of this astounding saga can color in the hues and vibrant shades of Robert Jordan’s most beloved fantasy world. Adorn the symbols of the Ajah and the patterns on Gleeman’s Cloak. Experience the peaks of Dragonmount, the depths of the Aryth Ocean, and other parts of the realm. Fill in evocative mandalas, depictions of Old Tongue, and an array of the Wheel of Time’s most well-known symbols and magical items.

Designed by officially-licensed Wheel of Time artist Amy Romanczuk, Patterns of the Wheel features 40 drawings inspired by pysanky, a traditional Ukrainian folkart, to provide hours of delight for The Wheel of Time's legions of fans.

AMY ROMANCZUK is an self-taught pysanky artist behind Tor Books' adult coloring book Patterns of the Wheel. She has been writing pysanky since 1996. Several of Amy’s original design pysanky were accepted to the collection of Kolomyia Museum of Hutsul Folk Art (Kolomyiskyi muzei narodnoho mystetstva Hutsulshchyny) in Ukraine. She has taken the designs and details of her craft to inkwork, paintings, and coloring art. Her works can be found in several galleries and online at czukart.com.


Praise For Patterns of the Wheel: Coloring Art Based on Robert Jordan's The Wheel of Time (Wheel of Time Other)…

"For fans of Robert Jordan’s expansive series, this will be a great addition to their collection, one that gives them the added fun of coloring it and making it their own." —San Francisco Book Review
or
Buy Here
Copyright © 2020 American Booksellers Association