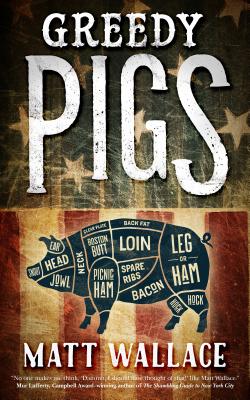 “I never did give them hell. I just told the truth, and they thought it was hell.”

Politics is a dirty game. When the team at Sin du Jour accidentally caters a meal for the President of the United States and his entourage, they discover a conspiracy that has been in place since before living memory. Meanwhile, the Shadow Government that oversees the co-existence of the natural and supernatural worlds is under threat from the most unlikely of sources.

It’s up to one member of the Sin du Jour staff to prevent war on an unimaginable scale.

"Matt Wallace’s Sin du Jour series is a crass, funny, gross, and sweet blend of fight sequences and top chef cooking, with entertaining characters and their all too human (and extra-human) dilemmas the cherry on top. Chicken nuggets and the Easter Bunny will never look the same to you again." —Kate Elliott, author of Black Wolves and Court of Fives

"Though new readers will have little trouble losing themselves in this story, they shouldn’t miss out on the dark delights of this entire series." —RT Book reviews Top Pick

"Wallace's imagination is boundless, and his wryly funny storytelling manages to be heartfelt and completely gonzo at the same time." —Publishers Weekly