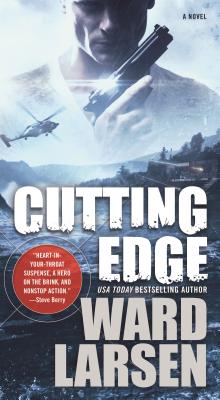 Trey DeBolt is a young man at the crest of life. His role as a Coast Guard rescue swimmer in Alaska offers him a rewarding job and limitless adventure. Then a tragic accident alters his life: during a harrowing rescue, his helicopter goes down.

Severely injured, DeBolt awakens in a seaside cabin in Maine, thousands of miles from where the accident occurred. His lone nurse lets slip that he has been officially declared dead, lost in the crash. Back in Alaska, however, Coast Guard investigator Shannon Lund uncovers evidence that DeBolt might still be alive. Her search quickly becomes personal, but before she can intervene, chaos erupts outside a cabin in the wilds of Maine.

The nurse who has been treating DeBolt is brutally killed by military-trained assassins. DeBolt is only saved when a bizarre vision guides him to safety. Soon other images appear, impossible revelations that are unfailing in their accuracy. As he runs for his life, DeBolt discovers he has been drawn into an ultra-secret government project. The power it bestows is boundless, both a gift and a curse. Yet one thing is certain: Trey DeBolt has abilities no human has ever known.


Praise For Cutting Edge: A Novel…

“A chilling and foreboding read from a long-time master of suspense. Ward Larsen brought his A-game to this one—a tantalizing blend of heart-in-your-throat suspense, a hero on the brink, and non-stop action. It’s a wicked ride.” —Steve Berry, New York Times bestselling author of The 14th Colony

“Ward Larsen is an amazing talent. Cutting Edge is the Bourne Identity on steroids.” —Stephen Coonts, New York Times bestselling author of The Art of War

WARD LARSEN is a USA Today bestselling author and three-time winner of the Florida Book Award. His work has been nominated for both the Edgar and Macavity Awards. A former US Air Force fighter pilot, Larsen flew more than twenty missions in Operation Desert Storm. He also served as a federal law enforcement officer and is a trained aircraft accident investigator. Look for Amber Entertainment's film adaptation of Larsen's first thriller, The Perfect Assassin.
Loading...
or support indie stores by buying on
(This book is on backorder)