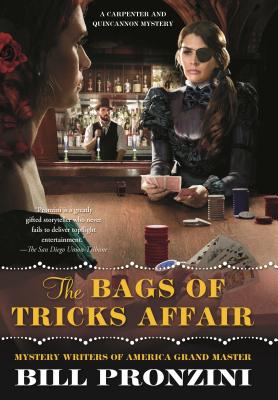 The Bags of Tricks Affair (Hardcover)

A conman always has a bag of tricks, ready to fool the unsuspecting, and almost everyone is unsuspecting until they get taken. When that happens, they turn to Carpenter and Quincannon, Professional Detective Services, to recover their money and what’s left of their dignity, and perhaps even to save their lives.

When one such case leaves Sabina Carpenter the only witness to a murder, the family of the culprit vows to stop at nothing to keep her silent. The threat leaves John Quincannon deeply concerned for Sabina’s safety, but there’s no rest for the wicked and so the crime-solving duo must split up to tackle two separate con games, run by two villains with deadly bags of tricks at hand.

And when Sabina’s life is put in danger, John must rush to save her while grappling with the terrifying realization of exactly how much she means to him.

Praise For The Bags of Tricks Affair: A Carpenter and Quincannon Mystery…

Praise for the Carpenter and Quincannon Series:

“This fast-moving novel offers plenty of fun.”—Publishers Weekly on The Bags of Tricks Affair

"Four stars. The plotting is great fun."—Ellery Queen Mystery Magazine on The Plague of Thieves Affair

“Those who enjoy historical mysteries are in for a particular treat with this delightful new series featuring two intrepid detectives who solve their cases using different but equally effective methods.” —Booklist on The Bughouse Affair

"Readers will enjoy the historical details as they ponder the cases and wonder about the Carpenter-Quincannon relationship."—Booklist on The Body Snatchers Affair

"Historical mystery readers will enjoy this well-researched story from a pair of always reliable genre veterans."—Booklist on The Spook Lights Affair

“An intriguing mystery.”—Publishers Weekly on The Spook Lights Affair