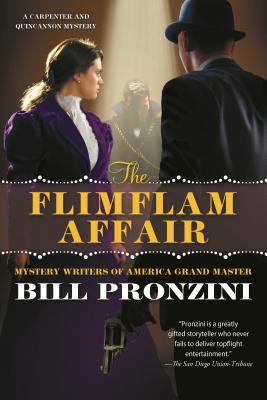 Carpenter and Quincannon, Professional Detective Services is a fixture in San Francisco at the dawn of a new century. While the future is unclear, Sabina and John know one thing for certain; they will protect their clients from flimflammers, thieves, and murderers, and do whatever it takes to run these dregs of society into the arms of the law.

Sometimes, that requires a subtle touch. Professor A. Vargas, self-styled medium extraordinaire, and his partner Annabelle, use guile and trickery to swindle bereaved men and women eager to contact the spirits of deceased loved ones. John and Sabina must not only unmask these charlatans, but also solve the riddle of an impossible murder in the midst of a séance.

Other cases involve brute force and personal danger. Such as the theft of a burglarproof safe mysteriously emptied of gold bullion. And John’s pursuit of a ruthless gang of counterfeiters, whose leader appears to be a man from John’s past in the Secret Service—a man thought long dead.

Adding spice to these exploits is Sabina and John’s personal relationship, which is rapidly progressing to an exciting new level.

The Carpenter and Quincannon Mysteries:
#1 The Bughouse Affair
#2 The Spook Lights Affair
#3 The Body Snatchers Affair
#4 The Plague of Thieves Affair
#5 The Dangerous Ladies Affair
#6 The Bags of Tricks Affair
#7 The Flimflam Affair


Praise For The Flimflam Affair: A Carpenter and Quincannon Mystery…

Praise for the Carpenter and Quincannon Series:

“...there's more than enough to satisfy readers looking for a fast, fun escape from their daily cares.”—Publishers Weekly on The Flimflam Affair

“This fast-moving novel offers plenty of fun.”—Publishers Weekly on The Bags of Tricks Affair

“Four stars. The plotting is great fun.”—Ellery Queen Mystery Magazine on The Plague of Thieves Affair

“Those who enjoy historical mysteries are in for a particular treat with this delightful new series featuring two intrepid detectives who solve their cases using different but equally effective methods.” —Booklist on The Bughouse Affair

"Readers will enjoy the historical details as they ponder the cases and wonder about the Carpenter-Quincannon relationship."—Booklist on The Body Snatchers Affair

"Historical mystery readers will enjoy this well-researched story from a pair of always reliable genre veterans."—Booklist on The Spook Lights Affair

“An intriguing mystery.”—Publishers Weekly on The Spook Lights Affair