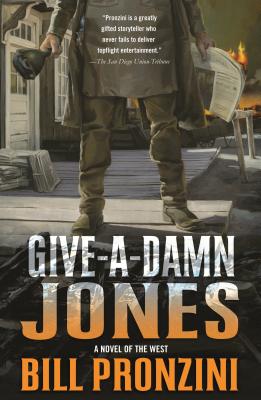 A Novel of the West

Mystery Writers of America Grand Master Bill Pronzini debuts a thrilling western with expert storytelling and a mysterious hero who will appeal to Pronzini's Nameless fans.

Not all the folks who roamed the Old West were cowhands, rustlers, or cardsharps. And they certainly weren’t all heroes.

Give-a-Damn Jones, a free-spirited itinerant typographer, hates his nickname almost as much as the rumors spread about him. He’s a kind soul who keeps finding himself in the wrong place at the wrong time.

That’s what happened in Box Elder, a small Montana town. Tensions are running high, and anything (or anyone) could be the fuse to ignite them: a recently released convict trying to prove his innocence, a prominent cattleman who craves respect at any cost, a wily traveling dentist at odds with a violent local blacksmith, or a firebrand of an editor who is determined to unlock the town’s secrets.

Jones walks into the middle of it all, and this time, he may be the hero that this town needs.

Praise For Give-a-Damn Jones: A Novel of the West…

“One of the best in the mystery-suspense field.”—The Washington Post Book World

“[Nameless] is the classic private-eye hero pared down to the bone; he has no identity except for his detective work…He is a remarkable creation.”—Chicago Sun-Times

“The best rock ‘n’ roll songs are two minutes fifty seconds long, and the best short detective novels are written by Bill Pronzini. In both genres you are drawn in immediately, have a lot of fun, and when it’s over, you look ahead to the next time.”—The Boston Globe

“The reader’s involvement with Nameless and his problems continues to increase in intensity, making the series succeed on an emotional level rare in the field.”—Ellery Queen’s Mystery Magazine

“There is no living writer whose work more faithfully embodies the spirit of classic private-eye fiction than Bill Pronzini’s. [It is] classy, classy noir storytelling.”—The Plain Dealer (Cleveland)